Dr. Richard Shrock will be speaking about his role in elucidating the catalytic reaction that led to a Nobel Prize in 2005.

Please note that the closing date for abstracts is June 5 2015 this year. Click here for further information from Conference Chair, Tiona Todoruk, regarding abstract submissions. In addition, we are pleased to say that we have been able to keep registration fees unchanged, with a discount once again for authors. Online registration will open in June.

We hope you will plan to attend and present at the 5th Annual SABCS Conference!

The Vancouver Island Section of the Chemical Institute of Canada is hosting a special guest presentation by Dr. Robie Macdonald entitled:

The Arctic Ocean: a place where geography meets chemistry

Robie Macdonald is a renowned ocean chemist and a former winner of the Vancouver Island Chemistry Award. Recently retired from the Institute of Ocean Science, he actively continues his interest in ocean chemistry as an Emeritus scientist there.  The presentation is geared to an audience, including students, who have some basic  knowledge of chemistry.

The CSAP Society is supporting the next generation of Contaminated Site Approved Professionals by offering up to three $5000 scholarships to applied science and engineering graduate students whose research is relevant to the assessment and remediation of contaminated sites.  More information and application forms are available from CSAP; the deadline is March 31, 2015.  The ACPBC is a partner organization of the Society of Contaminated Sites Approved Professionals (CSAP).

ACPBC and the Professional Chemist in BC

Dr. Robie Macdonald, and marine geochemist and Head of Environmental Quality at the Institute of Ocean Sciences in Sidney BC has been named as the recipient of the 2014 Northern Science Award by the Canadian Polar Commission.
Dr. Macdonald is internationally recognized for his innovative and insightful use of chemical data on trace metals and organic compound concentrations in the oceans and sediments to examine natural processes and the effect of human activities on the marine environment.  The ACPBC congratulates Dr. Macdonald on this significant recognition of his achievements.

Invitation to attend the BC Academic-Industry Mixer II

With the support of the ACPBC, the Vancouver Section of the CIC and NSERC will be hosting a mixer on November 18th. For more information about the event including how to RSVP, please see the attached poster.

The ACPBC Annual General Meeting and Professional Development Workshop will be held on Thursday, August 28th in downtown Vancouver.

Simon Fraser University Harbourside Center
515 West Hasting Street, Vancouver BC
Room 7000 (Earl and Jennie Lohn Policy Room)
Call to Order 17:00
The AGM is open to all ACPBC members and will include the business of electing the Board and Officers and an update from the Association President, Paul West.

FCPC launched! A step forward for professional chemists in Canada.

The FCPC is a federation of professional chemist organizations and regulators. Its role is to: 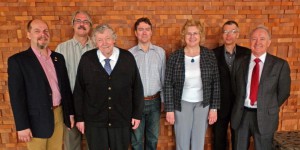 Following the founding meeting on June 2, Paul West on behalf of the FCPC signed a Mutual Recognition Agreement (MRA) with the Canadian Society for Chemistry (CSC). Lorenzo Ferrari, CSC President (2013-2014) was the CSC signatory.

These are two significant steps forward for Professional Chemists.  More comments on the FCPC and its role in enhancing the chemical profession are available on the CSC website.

This was a great opportunity to examine all aspects of “what it means to be a professional” .

The ACPBC has developed an arrangement with our ACPA colleagues in Alberta to deliver their well- received professional ethics course.  This is a one-day small group workshop that has something of value for all chemical professionals.

Stay tuned for the next course offering in Fall 2014.